Having travelled across Europe and Asia since 2011, mostly solo, I have had my ups and downs before officially becoming a digital nomad nowadays. Most people would say that traveling alone is not easy, and certainly not for everyone. However, I believe going full-time solo is one of the best way to learn, experience and develop yourself and skills set that can be achieved only by being solo travelettes. Below you will find a detailed listing of problems I faced when traveling throughout Asia and Europe, and how to overcome them. I believe many people had the same issues. Hope this article would help women across Asia to travel better and longer.

Everyone was wondering why I traveled alone in Asia

To travel within Asia and Europe is a huge difference in terms of culture, food and so on. However, it is still fascinating for me to see and experience how people treat solo female travellers differs between these two continents. When I was backpacking alone in Europe, most locals were very welcoming and amazed by the fact that I was bold and brave enough to wander by myself. Many people helped me as I was alone and new to the surrounding, regardless of having lived in Europe for years.
Nevertheless, to travel alone as an Asian girl in Asia still seems to remain a strange concept. It’s ok though if you are a white backpacker. Otherwise most people would hang out as a couple or in a group. Even in Vietnam, some locals would feel pity for me as I was eating alone in a restaurant (by my own choice). The good thing was they tried to be my company then. Most of the cases, Vietnamese were just asking me where my boyfriend, family or companions were. My Family, most of my friends and even colleagues who work with me remotely were probably also worried that something bad would happen to me. So far, nothing significant did!
How-to: Despite the time that I really had to work alone or spend some time for myself, I would always approach people around when traveling – who I believe would be able to have valued conversation with. The best thing about traveling alone is to get to know new people easily, but be wise about who to pick. You do not want to waste time with people who dont share the same values. The locals and experienced traveler are the ones to look out for help!

Being an open-minded and internationally oriented person, I always find it hard to tolerate any sort of racism and discrimination, even the slightest ones. I did not experience any major racism when I was living and traveling in Europe. However, it was sometimes funny to face comments (for example, about my eyes or skin colour) or questions like: ‘How come your English is so good?’ or ’Can I take a photo with you?’ (simply because the person never met an Asian before!). This was in Bosnia and Herzegovina.
In Asia, the story is different. When I was in Thailand or Singapore, most people would speak Thai or Chinese to me as I looked like a local. This is great as the chance is get ripped off as a tourist is less! In Vietnam, many locals would treat western people nicer than locals, but watch out when they try to charge  you double the real price!
How-to: do not worry about coming from a developing country and learn to be flexible. In Europe, I was warmly welcomed at a hostel in Montenegro and stayed for free simply because of the first Vietnamese person to stay there. People are excited about new things, and perhaps ’exotic’ people too!

In fact, many solo travelettes and digital nomad cannot afford to be in a long-term relationship as we dont stay in a fixed location for too long. Despite hating long distance relationship a lot, I got myself mostly into lDR or short-term flings. What other choice do you have when you happen to meet the person that you believed was ’the one’, but to fall for him? It turned out that being in a stable relationship never worked out for me. Therefore, I chose to be alone and attached to family, friends and potential partners.
How-to: Being single and not married before 30 in Asia and especially Vietnam is such a forbidden thing, for real! However, I have met different western people that chose to stay single by 30 or even 40, and are happy with it. It’s important to find the right date, right boyfriend, and right life-time partner. But it has to be at the right place and time. If you cant dedicate enough time and effort for long distances, do not force yourself to be in a serious relationship!

We travelettes suffer hell lots of health problem on the road. That could be any issue with with your stomach, back, hair, skin, etc. Staying fit and gorgeous is quite a mission impossible when traveling for many girls, including myself. You simply enjoyed the sun, the food, or the experiences so much that you tend to forget simple things for a girl to do on a daily basis to take care of yourself. In 2016, I moved back to Vietnam due to my health issue, which was the same for my Austrian friend who was working while traveling the world by herself as well.
How-to: there are different ways to maintain your heath and beauty on the road. Drinking lots of water, keeping your skin away from strong UV lights, going for sporty activities instead of relaxed luxury trips are some examples. When I get the time to be back home, I would spend afternoons doing work-outs, having facial masks and hair treatment. Even while being abroad, I try to keep track of these small activities though it’s hard to ‘feel like home anywhere’!

Put aside beauty and shopping

Shopping was more of a hobby than passion for me when I was a teenager. I initially wanted to become a fashion blogger, but turned travel and lifestyle blogger because of getting biten by the travel bug. Shopping was also something I had to cut off since the beginning of my journey as a travelette. I simply cannot afford to pack tons of clothes in a carry-on luggage, which would be the only thing I take when traveling. Plus, I’d rather spend for flight tickets in Europe, which can be even cheaper than a pairs of jeans.
How-to: I tend to dress simple but also nicely when traveling, not just for the photographs but also to make sure I dont look like a wandering backpacker but more like a local. To mix and match, pack and wear different layers help to keep you warm and reasonably fashionable on the road!

Many travelers from Asia cannot travel to most of the countries in the West, unless you are from Singapore, Malaysia, Japan, etc. Even if you can, it’s only possible to stay under 30 days, or 90 days maximum. I was only allowed to visit something around 50 countries around the world with my green Vietnamese passport. However, the whole situation changed as I started my bachelor in Finland. This gave me access to visit not just 26 nations in Schengen area, but a few more within Europe (e.g. Russia and the Balkan countries). It was such a great privilege and chance for me to see the world.
How-to: You can always easily apply for a visa to other countries in Asia, as long as you ensure a stable income and well planned itinerary. 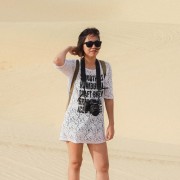 Huong Nguyen is a Vietnamese solo female traveler turned digital nomad. When not spending time at the gym, she loves exploring the world whilst working on the road with a laptop on her suitcase.

This site uses Akismet to reduce spam. Learn how your comment data is processed.